For quite some time, I’ve been fascinated by the language of inspirational quotes and proverbs. And so, on a recent trip visiting family, I stumbled on a copy of Alexander Hislop’s “The Proverbs Of Scotland”, a collection of about 4,000 dating from around 1862. Some of my favourites include:

“Ye shine like a white gir about a shairney cog” (“cog” is a metal-bound bucket for milking, “gir” is a metal hoop, “shairn” is cowshit)

“I can dee fat I dow: the men in the Mearns can dee nae mair” (this last is pure “Doric”, a distinctively Aberdeenshire variant of Scots)

Scots is a wonderful basis for this: it’s close enough to English that many will get the gist, but many of the words are different enough that unless you know them, they introduce a delightful ambiguity. Hislop’s book an a great glossary, but there’s also an excellent online Scots dictionary to explore, with many pointers into Scots literature.

To hear a wonderful example of the Scots Language, check out this podcast recording of Stevenson’s “The Tale of Tod Lapraik”, a semi-gothic tale set on the Bass Rock. Many of the proverbs resonate with this story, in particular, “wabsters” (weavers) were among the least-well-regarded members of citizenry.

And yes, some of Hislop’s examples demonstrate the very long tradition of outstanding Scottish insults, which continues to this day. In fact, I hope to add more modern Scots in, to maintain this tradition.

So I wanted to achieve a few things:

So, in this small project, I wanted to build a small Twitter bot using artificial intelligence, and specifically a small language model, to generate made-up Scots proverbs while preserving as much as possible of their language and rhetorical style, each with an accompanying image, and to tweet them every few hours.

If you want to take a look, check out @ScotsProverbBot on Twitter, although it’s early days, and the collection will grow over time. It’s currently set to tweet out a new proverb every eight hours, starting at noon Edinburgh time (obviouasly).

An intriguing part was building the bot itself with a proper degree of legitimacy. Twitter have been pretty good at tightening the rules around writing bots, so I needed write a statement describing what I wanted to do, and why.

Several times they connected back and asked more about what I intended to do with the Twitter data. The answer is: nothing. As in all my past work, this is privacy by design. The bot literally reads nothing! All it does is generate text and images, and tweet them.

This required “Elevated” access, but once set up, it was all very straightforward. The actual coding wasn’t too bad, either: 99% of the work was authentication, which is not as well-described as it might have been. It’s very good at apps, less good for autonomous devices.

For the dataset, even though Hislop’s book is online, I went “old school” and photographed and transcribed the pages. I made some punctuation changes, and removed the annotations in English. I did remove a few proverbs, particularly for racism. What was acceptable in 1862 is not acceptable today, unsurprisingly.

The machine learning parts are built using Pytorch, and, for now, a character-based recurrent network. Yes, there are better models out there, but I’m interested in how well a small network, a couple of hundred thousand parameters, can capture the rhetoric of the proverbs, as well as a decent Scots vocabulary. For now, this is good enough, especially that the data set is not too large.

Personally, I am not a fan of Python. I will tolerate it, in Pytorch. However, I’d never ever want to use Python in production. As is my usual toolset, it’s all done in JavaScript. So, the deployment approach is this:

The Node ONNX runtime is actually a C library, so the performance is very decent, but building it took a little work. In the end it was easier to flatten the Pi and reinstall with a 64-bit OS than to attempt to build the ONNX runtime for the 32-bit system. Although the pure JavaScript ONNX would also have been fine, just a little slower. It’s still not bad, it generates whole proverbs and accompanying rendered images at about 3 per second, and since I’m aiming to tweet every eight hours or so, this is fine.

[Note: there’s also an excellent translator from ONNX to C, which generates straight C code with zero runtime dependencies. I’ve successfully used this to put this kind of language model onto, for example, a Pico RP2040 microcontroller. Done naively it is relatively slow, due to emulation of floating point arithmetic, but it works fine. The model developed for proverbs would fit fine in an RP2040 if we wanted to embed it in a physical artifact.]

From the start, I wanted each proverb to show in “inspirational quotes” style, with a nicely formatted font and background image. So, as well as generating text, I needed to render it to an image.

Accessibility was very much in mind, so again, from the start, I needed to be able to add the image metadata alternative text to the tweet itself.

I have a decent collection of fonts, but many were Postscript, so I had a happy hour converting them all to OTF fonts, and then choosing a nice sample that fitted, more or less, the period and the style I was looking for.

All the images were from my personal collection, and all are of various parts of Scotland. So there may be a few recognizable places and mountains. Suilven is there, obviously. Final image rendering is done entirely with node-canvas.

Here are some examples, whether or not they make it into the final feed, who knows? I will be applying some manual moderation, at least to start with – not to select the best, but to be sure we don’t break any rules with anything too naughty. 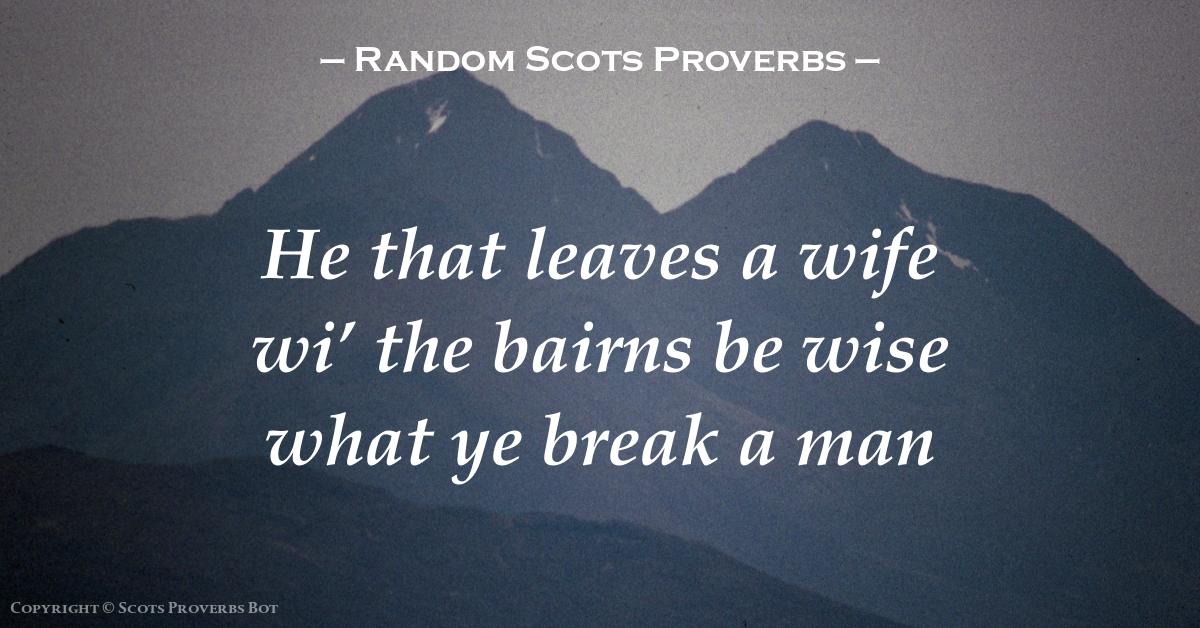 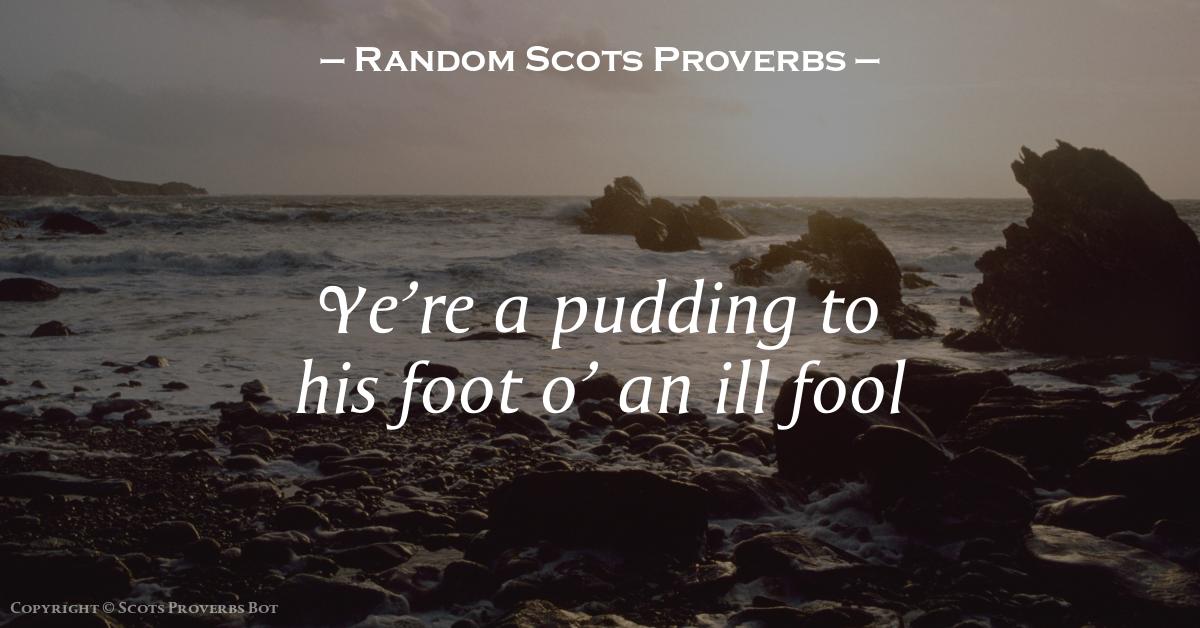 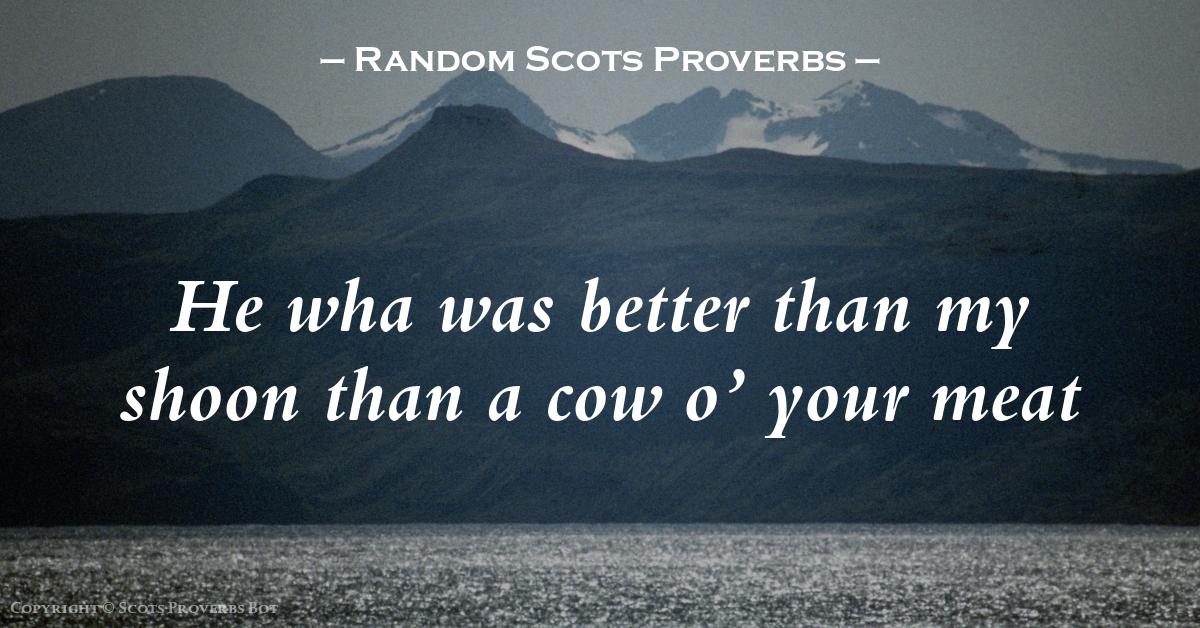 Other than that, there’s plenty of opportunity to improve the training data and the model considerably. I’d love to switch to transformers, but I’m using character level models due to the relatively small amount of data, and character transformers aren’t the very easiest.

It’s also likely that I open up some variation in the designs and layouts relatively soon.

Thank you for reading. And I hope you enjoy it, and want to find out a little more about the Scots language.

If you choose to support me through @buymeacoffee, I’d be grateful, happy, and caffeinated.